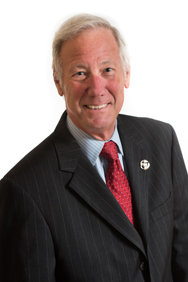 Widely recognized as a national leader in the public accounting field, Robert Goldfarb has twice been named as one of the Top 100 Most Influential People in Accounting by the highly regarded trade publication Accounting Today. With more than 35 years of accounting and advisory experience, Bob has long dedicated himself to providing premier client service and to sharing his knowledge by mentoring and training junior staff whenever possible.

He has appeared on television news, written several books on taxation updates, served as the technical editor of Clinton Administration Tax Legislation and is currently the Editor-in-Chief of the Journal of the CPA Practitioner. He is regularly called upon to speak at events for the American Institute of CPAs, many State Societies of CPAs and the National Conference of CPA Practitioners.

Bob is a member of the New York State Board of Public Accountancy, appointed by the New York State Board of Regents to this regulatory position. He is a Past President of the National Conference of CPA Practitioners, receiving the organization’s Lifetime Service Award, and he has served as Chairman of its National Tax Policy Committee and National Issues Committee. He recently completed a term on the governing council of the American Institute of CPAs and has been appointed to the AICPA Nominating Committee. He is also a member of the New York State Society of CPAs, and he chairs the Long Island Tax Professional Symposium and the IRS Long Island Tax Practitioner Liaison Committee. Additionally, Bob has been recognized as “Businessperson of the Year” for his service while President of the Great Neck Chamber of Commerce and President of the Great Neck Lions Club.

With his colleagues from Schoenfeld Mendelsohn Goldfarb LLP, where he served as the Managing Partner, Bob joined Janover LLC in 2013. He has been a Senior Adjunct Professor of Accounting at Adelphi University, where he taught for more than twenty years, and an adjunct professor at Hofstra University. He received his Master of Arts degree in Business Education from Adelphi University, his Master of Business Administration degree from Hofstra University and his Bachelor of Business Administration degree from Pace University.

Away from the office, Bob has raised more than $40,000 for the Leukemia and Lymphoma Society by participating in several triathlons and more than $15,000 to support AIDS research through bicycle rides from Boston to New York. He recently completed an Iron Distance Triathlon in Sandusky, Ohio. He has also served as Treasurer of The Child Center of NY.

View all posts by author Sign Up For News Alerts